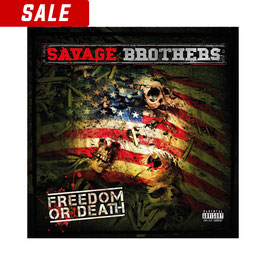 They say real bad boys move in silence...well, four years of silence is definitely enough for South Carolina based Savage Brothers, so now they are back for good and fully reloaded with that Goon MuSick. The new studio album "Freedom Or Death" continues with the same power and hunger where the Brothers left off on "A Fist In The Thought" & "The Iron Fist." Their gritty street lyrics are taking you straight back to the essence of Hip Hop as they leave the mic smoking and fans dripping for more of that south cack life struggle.
Murderous beats and stomp down production is the soundbase for the savage - street bangers from the Snowgoons and european goon affiliates like Weirdo, Slicenberg, Hitfarmers, FlumBeatz, Luka and sicktunes make this album a gem and raw as hell. The same grittiness and raw power goes for the features on "Freedom Or Death." Legendary Onyx's own bald head Fredro Starr, West Coast heavy hitter Ras Kass, C-Rayz Walz, Big Kurt, Sean Strange, Beni-Hana & Diggieman all step in the cypher to contribute their skills extraordinaire.